The following is an excerpt from an article to be published in the Winter 2012 issue of Biodynamics. Photos ©Zuri Burns 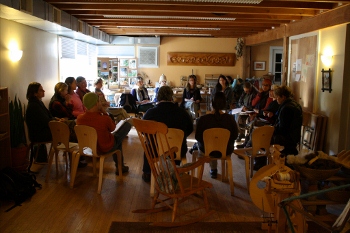 On the weekend of November 4-6th, farm-based educators inspired by anthroposophy met at the Hawthorne Valley Farm in Harlemville, New York. Even though Harlemville had sixteen inches of snow the week before, the oak trees on the surrounding hills were brilliant in their golden, russet and red. These were interspersed with the soft-needled white pines. Hawthorne Valley Farm is flourishing. The whole place is alive with activity, but not at the fast pace of the city, a more peaceful, steady pace perseveres.

We were welcomed at the Hawthorne Valley Farm Learning Center by a warm fire in the woodstove and Rachel Schneider, the learning center’s director. As people were gathering, Rachel led us in a felting project. After dinner we went around and introduced ourselves. All of us shared a common longing to bring gardening, farming and outdoor education more into the lives of both children and adults. Most of us have been working out of anthroposophy. We then went around and shared a quality that is typically found in the population we work with that could benefit from or be remediated by farm based education. 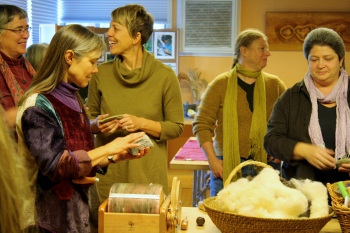 Rachel gave us a brief history of how Hawthorne Valley Farm came about. Karl Ege, a student of Rudolf Steiner and a teacher in the first Waldorf School in Stuttgart, Germany was asked to come to the United States to mentor the teachers at the Rudolf Steiner School in Manhattan. He occupied himself with the fact that, before his death, Rudolf Steiner had expressed the following: “To meet the future, we must turn the ship of Waldorf education one hundred and eighty degrees towards the arts, aesthetics, and the practical life.” From a wish to help “turn the ship” he and interested farmers, teachers, artists, and craftsman worked toward the founding of the Rudolf Steiner Farm School in Harlemville, New York. This later became the Hawthorne Valley Farm and the Hawthorne Valley School.

It is interesting that this same quote is cited on the brochure for the Rudolf Steiner College Western Waldorf Educators’ Conference that will take place in February with leading place-based education expert Aonghus Gordon from the Ruskin Mill Educational Trust in England. Find the full article about the Farm-Based Educators Retreat in the Winter 2012 issue of Biodynamics.