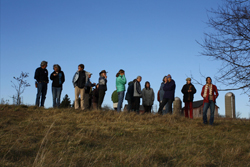 In light of the intense need in our time for children and adults to have strong wills and a greater connection to the earth, twenty-two farm- and garden-based educators inspired by anthroposophy, biodynamics, or Waldorf education came together in East Troy, Wisconsin, over three days in early November. Coming from such wide-spread places as Sacramento, California; Shelburne, Vermont; Chestnut Ridge, New York; Louisville, Kentucky; and Rockford, Illinois, the participants shared a common passion: to strengthen and grow this emerging field. The retreat began Wednesday afternoon at the Goldstein Farm with colorful needle-felting in response to the contrast between the forces of growth and decay. Project participants were able to continue to work on during the following two days. This project was led by Bente Goldstein (founder of FarmWise, LLC, and co-founder of A Week on the Farm). The meditative artistic work seemed to deepen everyone’s ability to be present and to participate from a centered place in themselves. After supper at the Michael Fields Agricultural Institute, where much of the rest of the retreat took place, Robert Karp, Executive Director of the Biodynamic Association (BDA), welcomed participants, who then introduced themselves. 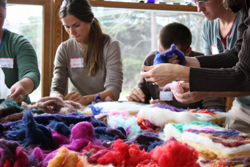 Thursday morning, Carol Avery, Educator for the Outdoor Lesson at the Pfeiffer Center in Chestnut Ridge, New York, gave a picture of the threefold human being in relation to the twelve senses and how the work of farm-based education meets the developmental needs of the whole child. What followed was the centerpiece of the whole retreat: a panel presentation and discussion about farm-based education curricula, led by Gabrielle Dietrich of Sacramento, Dawn Spanton of Philadelphia Community Farm in Osceola, Wisconsin, and Bente Goldstein. “If it is one of their first times in agriculture, remember to be sympathetic,” said Gabrielle. “You need to know your own passion and need to meet the kids where they are.” Dawn shared a picture of a three-petaled encounter process that includes the institution itself, the staff group, and the participant group, with the goal at the center of fostering independent, creative, moral work in the world. She recommended the book Awakening the Will, by Conrad Van Houten, as a resource. Bente spoke eloquently on the question of how we can educate the will. “Steiner says, in order to develop will, you need to give resistance,” she said. “In our feeling life, that means suffering. In thinking, that means riddles, problems that aren’t solved yet. We need to build up the will like a muscle and do [an activity] again and again.” “The farm,” Bente said, “is the perfect place to prune the will.” Bente described farm-based education as “need-u-cation,” helping young people figure out what they can do in the world so that they can say, “I made a difference.” She also noted that physical activity in time and space helps children incarnate. After lunch Thursday, the whole group took a field trip to the farm of Dana Burns, co-founder of A Week on the Farm. Dana organized the participants into three groups that rotated through a variety of activities, including sheering sheep, giving sheep remedies, working with a goat-led cart, and handling horses. Dana prepared participants for the field trip by giving an overview of the whys and hows of incorporating various animals into a farm-based education program. Before dinner there was time to work in small groups to support several participants who had a burning issue in their work, using a process called “case clinics,” developed by Theory U author and trainer Otto Scharmer and facilitated during the retreat by Robert Karp. After supper, participants watched a short movie about A Week on the Farm that sparked much good conversation. On Friday morning, Deb Crocket of Angelic Organics Learning Center gave an educational and inspiring introduction to one approach to attaining financial and organizational sustainability, which is practiced at Angelic Organics and is based on The E-Myth by Michael Gerber. Some keys to sustainability, Deb said, are a clear mission for individuals and departments; clear responsibilities, standards, and empowerment for staff; and procedures for easy transfer of tasks. She also recommended that, by operating efficiently, an organization, such as Angelic Organics, would spend 70% of its budget on programs, 18% on management, and 12% on fundraising. The retreat concluded with a conversation facilitated by Robert Karp on the future of the field of farm- and garden-based education inspired by anthroposophy. The group reviewed ideas that arose from last year’s retreat and then brainstormed themselves about the future of this field. As a result, a carrying group formed to plan next year’s retreat, establish a web presence, form a mission statement, and begin a dialogue with the Association of Waldorf Schools of North America. Members of this carrying group are Carol Avery, Dana Burns, Gabrielle Dietrich, Julie Drigot from Prairie Hill Waldorf School in Wisconsin, Mary Goral from Fox Hollow Farm in Kentucky, and Stephen Payne from the Sacramento Waldorf School.