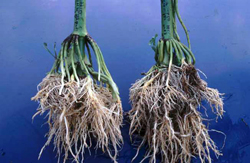 Scientific research in biodynamic agriculture supports our evolving understanding and application of biodynamic practices. Research has played an important role for biodynamics since its inception. During the 1924 Agriculture Course (where Rudolf Steiner outlined the principles of biodynamic agriculture), the farmers in attendance founded an Experimental Circle, which worked in close cooperation with the Natural Science Section of the Goetheanum. Practical experiments were carried out at numerous farms and research stations.  By 1929, the Experimental Circle had centers in most countries of Europe and in Asia, Australia, New Zealand, America and Africa (Steffen et al. 1929)1.

Between the 1920’s and today, people from a wide variety of scientific backgrounds and philosophies have undertaken research into biodynamic agriculture. Existing projects include long term farm trials, university studies, grassroots initiatives and the contributions of private research institutes. The body of research includes natural scientific studies, as well as contemplative, theoretical and spiritual scientific studies.  Picture forming methods such as sensitive crystallization and chromatography are applied to support the observation of living formative forces, quality and vitality.

The Research References Portal aims to make existing biodynamic research literature more readily available, so that future work can connect to and expand on it.

Science in the Context of Biodynamics

Rudolf Steiner articulated a broad view of science and spoke of its importance for social renewal and cultural evolution. He recognized the contribution of the disciplined and exacting methods applied in modern natural science. He further called for a holistic scientific approach, encompassing both outwardly experienced material phenomena and inwardly experienced spiritual realities. The following quotes illustrate the scientific worldview from which biodynamic agriculture originated, and through which  it may be further understood and developed.

“We must begin by acquiring the discipline that modern science can teach us. We must school ourselves in this way and then, taking the strict methodology, the scientific discipline we have learned from modern natural science, transcend it, so that we use the same exacting approach to rise into higher regions, thereby extending this methodology to the investigation of entirely different realms as well...Those who pursue spiritual science have less cause to undervalue modern science than anyone.” — R. Steiner, The Boundaries of Natural Science. Lecture 3. September 29, 1920.2

“The plants and animals on Earth…cannot be understood in isolation…it is nonsense to seek within the compass needle itself, the reason why it always points to the north…Just as we have to look at the whole Earth when we want to explain how a compass needle behaves, so must we also consult the whole universe when it comes to understanding plants." — R. Steiner, Spiritual Foundations for the Renewal of Agriculture. Lecture 6. June 14, 1924.3

“When the way has been found not only to experiment and to observe the outer results of the experiments but really to enter into the inner course of the natural phenomena, then only can these results be fruitfully integrated into human cultural evolution” — R. Steiner, Warmth Course. Lecture 2. March 2, 1920.4