Mark crossed the threshold on June 25, 2020. He was a member of the Biodynamic Association and served for many years as a regional coordinator for the North American Biodynamic Apprenticeship Program.

Originally from Northern Indiana, Mark Trela first encountered biodynamic agriculture living in Southern California where he met Peter Dukich, who became his mentor and elder. Mark then returned to the small southwestern Indiana community of New Harmony, and for years worked closely with town benefactor Jane Blaffer Owen and others to bring biodynamics to landscaping projects throughout the town. His primary love and work went into the creation and development of Fragrant Farms, home to 8,000 peony plants and six acres of grapes. At one point, he shipped thousands of biodynamically grown cut peonies internationally from Fragrant Farms. In the early 2000s, Mark then relocated to Terre Haute, Indiana, where he was the head gardener at the Sisters of Providence White Violet Center at Saint Mary of the Woods College.

After returning to Indiana in the 1980s, Mark connected with Harvey Lisle, Hugh Lovell, and Hugh Courtney, and became an active member of the Southeast Region Biodynamic Group. Over the years he attended conferences and gave workshops, as well as hosting biodynamic conferences and workshops in New Harmony.

His anchoring of the biodynamic movement in Indiana, and his willingness to share his knowledge, wisdom, and wit with everyone who asked, cannot be underestimated. 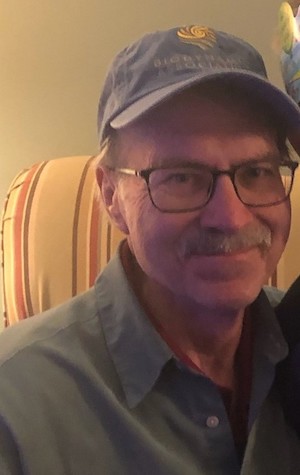 Memories from Beth and Nathan Corymb

In about 1989 or so there was a conference at New Harmony which Mark Trela organized about seed where he invited John Rahart to speak about Biodynamic Seed Growing.

It was one of the best and most inspirational astute offerings about Biodynamic seed we had ever heard and Mark and John made it happen in this historic place of New Harmony, Indiana. Mark was like a guardian of this historic attempt at community by Robert Owen. Robert Owen was one of the three people who Dr Karl Koenig chose as guiding lights of inspiration for the founding and leadership of the intentional Camphill Communities. We were graced to live at Camphill communities during the training in Europe as well as in the US for over 25 years.

Thank you Mark for your inspiration and guidance and we look for much more from your new view point from the Spiritual World!

(And by the way, Mark when you are not too busy with your tasks in Heaven, in order to continue this seed work in the middle of the country with a demonstration seed farm and company arising out of a whole Biodynamic Individuality in the MIDDLE OF THE US, Meadowlark Hearth is looking for at least one more passionate young woman to help the seed work here go into the Future. The Universe has sent us 2 wonderful young men.)

Be yourself. They will love you - Alicia Ellingsworth

As my teacher, I sometimes felt he and what he knew was unattainable. He walked swiftly, further, instead of driving as a practice, often to the post office, and frequently from the shop where he had just dropped off his red and gray F150 for repair. I read his struggle with my insensitivity to the nuances in the garden that showed themselves so easily to him. He was always kind and usually patient; he protected his biodynamic heart while engaging us, his garden crew, in the application and in the theory behind the practice. He walked between worlds, and labored tirelessly to support his four sons whom he adored, and admired for their chosen paths. After four summers working alongside Mark at White Violet Center for Eco-Justice, I was ready for a year-round farming opportunity. The chance came in Kansas City. The best advice I've ever received was what he shared as I headed to interview, 'Be yourself. They will love you.' Such simple advice, and words we've heard so many times. But, from my life's teacher, they were world-changing. I can still remember the power they had for me in the moment, and still today as I type with tears in my eyes: it was my graduation. I got that job and moved to KC. With that move, Mark became a friend, a peer, a supporter, a cheerleader. I moved into that prestigious category of people who regularly received his mix tapes and occasionally received a goodie box in the mail. We checked in regularly sharing successes, sunsets, seeds, and struggles. I knew he was sick, had been sick, but didn't know it had gotten so bad until just before the end.

After an odd message, I decided to visit. So grateful I did. His home in New Harmony like his others, so full of him. Books, cow horns, seeds, flowers, painted light bulbs, quotes hanging, dishes drying, chairs sitting around in circle waiting for music. There was always something in the air of his home. Not a smell, but a presence. We visited for a short time. He was very sick by then, but he was up walking about. His family had traveled from far to visit. His sons were there. Karen was there caring for him as she had been since January. I made my way to his garden of holly hocks, lilies, hops, carrots, chard, kale, peas, gooseneck loosestrife, blue sea holly, yarrow, and zinnias. Memories rushed through me during a short walkabout in that garden, he was there, we were there. Time was standing still and it was eternal. The visit was too short, and he passed four days later.

I'm headed back today to visit his garden one more time and gather some plants to plant and pass along. He gets the credit for me being myself so fully. He gets the credit for a beautiful new organization that is connecting kids to soil and themselves in Kansas City. I love him so much, and owe him everything. I will be myself. I've earned it, and will always be indebted to Mark for telling me so. Walk on, dear teacher, we will try to listen.

I don't remember the first time I met Mark Trela, but I know for sure it was at one of the annual Southeastern Biodynamic Conferences. He was a reliable fixture at the event. I'm sure he was attending before I began doing organizational work for the event, but I really came to appreciate him when it became my job to write up the schedule for the event, because it was wonderful to work with him. Mark presented each year, and his presentations were thoughtful, well prepared, and always different. Glancing back through my notes, I find references to the topics he covered over the past years: “Runes”, “The Lily and the Rose”, “The Endocrine System, Chakras, & Planets”, and finally, “Cancer, May I Have This Dance?”. It was clear that Mark was drawing on what was interesting and fresh for him, each year. And though I rarely got to attend an entire session of anyone's presentation during those years, when I looked at Mark's synopsis and notes, they were fascinating, and often beautiful.

Mark Trela always came with his eclectic shop in tow, too. It was like a biodynamic gardener's dream garage sale. I loved to peruse his selection of books, ranging from practical to arcane. There were painted cow horns, hand-knitted mitts from the Sisters of Providence, and the seasonal painted lightbulb decorations, which adorn our family Christmas tree each year. Mark was friendly, and a little on the quiet side, but peeking through the miscellanea of his shop gave us a taste of his whimsy and humor. I loved seeing him sit out there on those sparkling Autumn afternoons, with a friend and some runes, turning the stones in his hands and tinkering with their interpretations.

It is a challenge to describe the subtleties of a friendship that develops over years of spending just one weekend each year together, but I'll try. Watching the wheels of the gathering over time, I appreciate the collection of personalities that swirl together for those brief days of celebration, sometimes in harmony, sometimes in chaos. Mark was into harmony. Each time I heard him speak, I was struck by his certainty. He was confident with his understanding. He loved biodynamics, and loved sharing his understanding and affection for the land with others. But he was not loud or confrontational with his knowledge. The older I get, the more I appreciate men like Mark. One has to be a little quieter to hear what they have to say, and it is well worth the effort. When I think about Mark as part of the kaleidoscope of the biodynamic community, I smile. I remember his deep and genuine warmth. I remember the easy love of his boys and grandkids that he shared in casual conversation. I remember his beautiful flowers, and his silly puns. His love of us as part of his community shone through, and I hope he felt loved in return, because he certainly is.

I met Mark in New Harmony, Indiana in 1988 and arranged to apprentice with him to learn about biodynamic agriculture in the summer of 1989 and 1990.

For me it was love at first sight, sight of his gardens around the New Harmony Inn that is — a lush and vibrant landscape that mixed perennials and annuals with cabbages, scarlet kale, asparagus and strawberries. My love for Mark himself grew quickly thereafter.

While doing my apprenticeship I shared my interest in Tallgrass prairie preservation and restoration with him, and the fact that the land of Illinois had been 75% prairie before European contact. In 1989 only 0.001 % of the original prairie remained — making it one of the most threatened ecosystems on earth. Mark agreed to help me establish a prairie garden at the Inn, and in 1989 we planted 35 species of native grasses and forbs. Over the next 8 years I came to New Harmony once a month to work with him on our joint project and in the process came to know his wife and four sons. During these visits Mark and I planted and weeded and staked and burned our flourishing prairie, had community work days, and held regular workshops to educate the public about this vanishing landscape.  Mark was an indefatigable worker, supporter of all creative endeavors, a loyal and steadfast friend and support during our 32 year friendship.