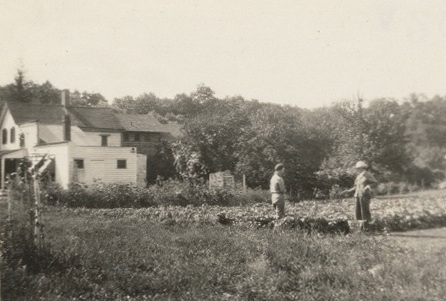 Vegetable garden beside the Main House in 1929

The story of biodynamics in America is deeply intertwined with the biographies of Ehrenfried Pfeiffer and of the Threefold Community of Chestnut Ridge (formerly Spring Valley), New York, home of the Pfeiffer Center for Biodynamics and the Environment.

The Community's story begins in 1926, when members of New York City's Threefold Group bought a farm in rural Rockland County, about thirty miles northwest of New York City. These American anthroposophists ran a laundry, a furniture-making shop, a rooming house, and a vegetarian restaurant near Carnegie Hall. Many of them had encountered anthroposophy and had even met Rudolf Steiner personally in Europe, and were at or near the origins of many anthroposophical impulses in the arts, education, medicine, and agriculture. Led by Ralph Courtney and Charlotte Parker, they shared a heartfelt obligation to bring anthroposophical ideals to life in the social fabric of the New World, and Threefold Farm was integral to this impulse. 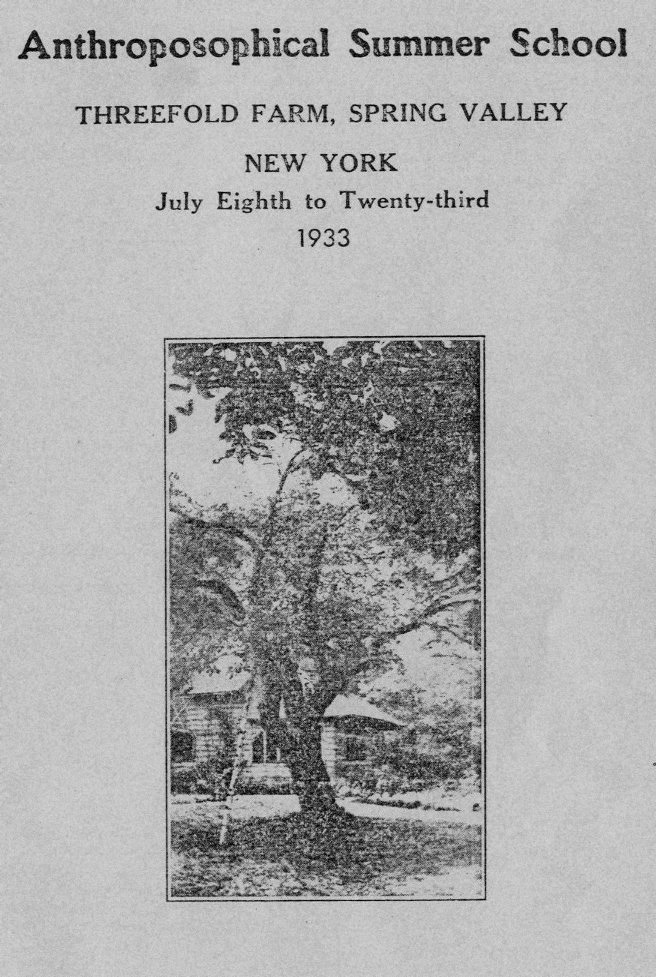 Pfeiffer, who was born in 1899, first met Rudolf Steiner at the age of nineteen. Pfeiffer's mother and stepfather were both anthroposophists and knew Steiner personally, but they never spoke to Ehrenfried about spiritual science, leaving him to find it on his own. Pfeiffer was in university at the time, and Steiner immediately set to work designing Pfeiffer's education. The course load was extremely heavy and strongly weighted to the sciences: as Steiner told Pfeiffer, to overcome materialism we must know its means and methods as well as we know our own.

Within a few years, Pfeiffer was living in Dornach and working closely with Steiner. Pfeiffer wrote that "[I]n 1922 Rudolf Steiner described for the first time how to make the biodynamic preparations, simply giving the recipe without any sort of explanation, just 'do this and then do that.'" It was Pfeiffer, with Ita Wegman and Gunther Wachsmuth, who made and applied the first batch of 500, years before the Agriculture Course of 1924. Pfeiffer was one of a small circle of people entrusted with putting biodynamics into practice, to get as much land as possible under biodynamic care so that, in Steiner's words, "in the future everyone will be able to say, 'We have tried it, and it works,' even though some of these things may still seem strange right now." 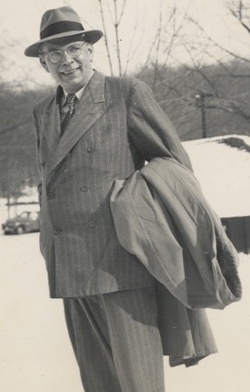 Ehrenfried Pfeiffer at Threefold Farm in the 1940s

In 1928 Pfeiffer took charge of Loverendale, a farm of over 500 acres in the Netherlands. To the massive task of converting a conventional farm to biodynamic, and making it economically self-sufficient, all in the difficult economic conditions of the inter-War years, Pfeiffer added considerable obligations as a speaker, teacher, and consultant, traveling extensively throughout Europe and North America. This established a pattern that persisted to the end of Pfeiffer's life, through all manner of adversity and illness: complete dedication to furthering the work begun by Rudolf Steiner in the social, spiritual, and agricultural realms.

Pfeiffer lectured in the United States regularly during the 1930s and was a fixture at the Threefold summer conferences, which grew in length and scope with each passing year. When the war came, Pfeiffer brought his family to Kimberton, Pennsylvania, where Alaric Myrin offered Pfeiffer the opportunity to create a model biodynamic farm and training program. During this period Pfeiffer also led the initiative to found the Biodynamic Farming and Gardening Association and to start the publication you are now reading. It was also while working at Kimberton that Pfeiffer met J. I. Rodale, beginning a relationship that gave biodynamics a little-known place in the early history of the American organic movement.

Interpersonal difficulties — a motif of Pfeiffer's life — brought to a close Pfeiffer's Kimberton Farms chapter. Aiming to continue his work training biodynamic farmers, Pfeiffer bought a farm in Chester, New York, where a small colony arose focused on farming, education, and the administration of the Biodynamic Association and its journal. This enterprise lost momentum in the late 1940s, when tuberculosis led to Pfeiffer's confinement in a New York State sanatorium in Pomona, not far from Spring Valley. His illness made it impossible for Pfeiffer to work his milk cows, so in 1946 he was offered living quarters and work space at Threefold Farm. Pfeiffer's Bio-Chemical Research Laboratory, which opened in 1946 and operated until 1974, worked to perfect the mass production of biodynamic preps, among many other projects.

Pfeiffer died in 1961, his life shortened by multiple illnesses and also no doubt by the massive workload he took upon himself, the scope of which is barely suggested in this brief account. 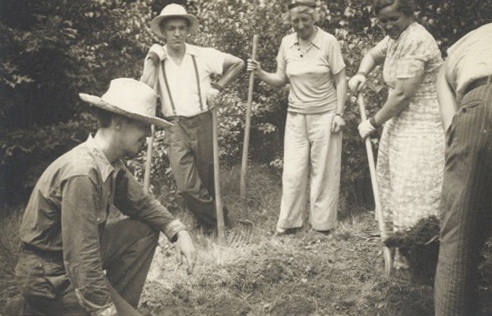 Co-workers gardening at Threefold Farm in the 1920s 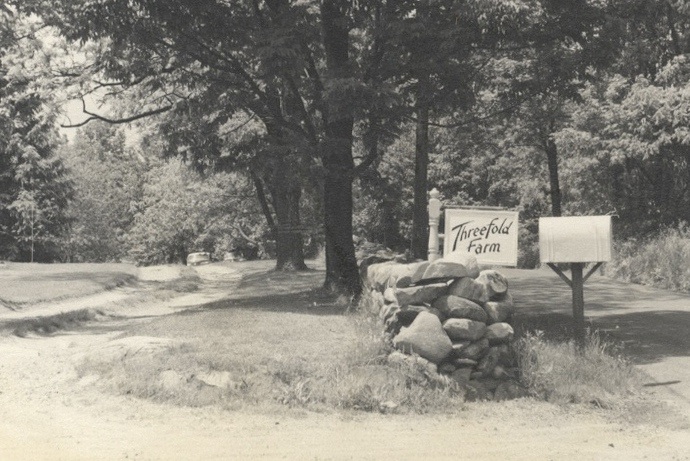 Threefold Farm in the 1930s

The Threefold Community holds a unique place in the history of biodynamics in America. Threefold Farm was perhaps the first piece of ground in America to be farmed using the biodynamic method, and Threefold land has been worked biodynamically continuously since 1926. The Biodynamic Association's annual conference was held at Threefold every year from 1948 until 1980. Given Ehrenfried Pfeiffer's twenty-eight-year association with the Threefold community, it was only natural that, when the Threefold Educational Foundation founded a center for biodynamics in 1996, the center was named after Pfeiffer. The Pfeiffer Center's Year-Long Part-Time Training in Biodynamics has hundreds of alumni, and dozens of interns have passed through the Pfeiffer Center's garden. Mac Mead, who became the Center's director in 2007, learned biodynamics in the 1970s at Threefold, from Fellowship Community co-workers who had studied and worked with Pfeiffer. All of this is a fitting tribute to a man who was present at the very beginning of biodynamics, who dedicated his life to fostering biodynamics, and who once wrote, "My innermost loyalty belongs to Rudolf Steiner. For him and his work I wish to continue to live."

Note: Tape recordings of Ehrenfried Pfeiffer's lectures at Threefold from the 1940s to the 1960s are being preserved digitally as a first step toward making them available to the public. Financial support for this project is gratefully appreciated. Checks payable to Rudolf Steiner Fellowship Foundation, Re: Pfeiffer Archive Project, may be sent to Dr. Paul Scharff, 241 Hungry Hollow Road, Chestnut Ridge, NY 10977.