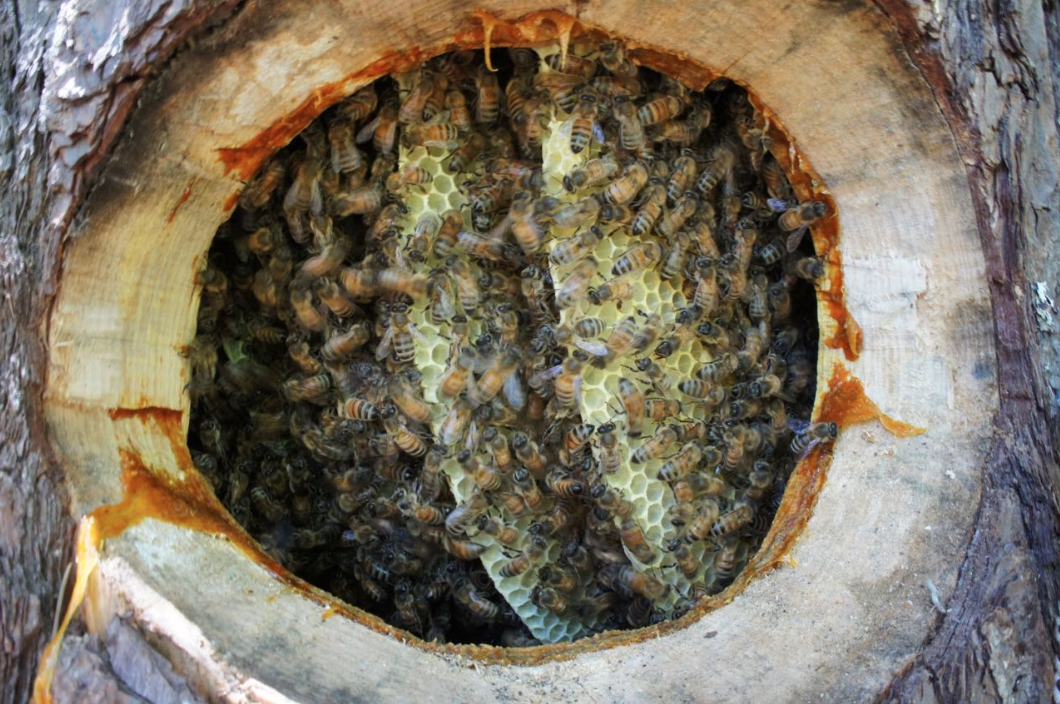 Of late, I have found myself fascinated by Goethe’s phenomenological approach and dynamic way of thinking and seeing. It seems to invoke simultaneously both curiosity and bewilderment. In my search for resources on the topic, I came across the wonderful book Taking Appearance Seriously, by Henri Bortoft.

He describes phenomenology as “taking the ground away from under our feet, whilst at the same time giving us a sense of being where we always have been — only now recognizing it for the first time”. He continues to explain that “the phenomenological approach makes us shift from what we experience into the experiencing of what is experienced”. Intrigued by the complexity and subtleness of this approach, it made me wonder how it could be applied to apiculture and honeybees.

“… one needs to study the life of bees from the standpoint of the soul.” (R. Steiner)

The nature of honeybees— which I would like to refer to from here on as the onebeeing — is complex, fluid, and appears to integrate polar opposite qualities. The surprising mammalian-like qualities in an insect body, and the singularity of the macro-organism, which consists out of thousands of individuals, are examples of the multi-dimensionality of its being. The onebeeing is a vastly dynamic form of life, exhibiting a breathtaking degree of plasticity and flexibility. Its own tissue consists out of thousands of individual bees, who are the medium for countless physiological processes ranging from metabolism, gestation, sense perception, to neurological processing. What is unique is that it functions as if it were undifferentiated tissue. No specific organ seems to appear, and yet all normal functions of inner organs are present. This tissue acts similarly to stem cell tissue without ever losing a complete open dynamic state of evolving according to current needs. Its receptivity and aliveness towards formative forces and fields in general transforms this tissue-like ‘gathering of individuals’ into a new dimension of life.

‘When we use the principles of logic we avoid contradiction, and so we cannot see reality as a whole.’  (Shohaku Okumura)

It seems that in order to understand the life gesture of the onebeeing fully, one would need an additional approach besides the linear or intellectual. Bortoft calls this “the sensuous-intuitive mode,” a contemplative act of witnessing and participating outside of our default dualistic way of being. By shifting our attention and awareness, we are able to create a space for an appearance “so that we can receive the phenomenon instead of trying to grasp it,” similar to Goethe, suggesting “to become the plant“ (onebeeing) that we are studying.

‘All life forms reflect the unknown gestalt of our soul.’  (Andreas Weber)

The onebeeing is a network of interrelations. Unlike our own default sense of self, hers is not defined as a living being separate from the world, but rather as being part of the world through intimate belonging. Her sense of self is created in dynamic and multidimensional processes, as if she were embodying a network of multiple selves. We could almost say that she “are” more other than self. The many bees appearing to our eyes “is” a time-gestalt, a language of the“great bee”. This cornucopia of levels of self comes with a change in language, as if common grammar were unable to reflect this phenomenon. The process of learning from her and studying through becoming the onebeeing not only reshapes our perception and understanding of “them,” but shifts inwardly our frame of reference. Our identity becomes more fluid, more open. Who “is” we?

In his book Metamorphosis, Andreas Suchantke describes bees as sensory-limb beings. He demonstrates how the “bee’s inside is its surroundings, into which it completely dissolves, and from which it receives a deep formative imprint;  … The border between the bodily interior and the outer world becomes blurred”— as if the onebeeing was never entering a dualistic world view.

It is a gift to be able to live with bees. The onebeeing reveals the deep truth of our life, and makes it palpable how our self is dependent on everything we call no-self.  Difference and sameness are merging, as the universe views itself through our eyes. Goethe’s organic thinking and the dynamic idea of the one and the many are revealing a fluid form of life.  The phenomenological approach not only opens our view and understanding of the biosphere, but it also brings a different understanding of the self. It ‘“liberates us from restrictive patterns of thinking” (Bortoft) and living our life.

‘… I’ve been circling for thousands of years and I still don’t know: am I a falcon, a storm, or a great song?’ (Rilke)

The onebeeing seems to speak in a similar language, inviting us to sense deeply and to listen to and follow our most significant questions.  Contemplation and inwardness are not only essential when practicing phenomenology, but are keystone elements for a bio-dynamic transformation of our life.

‘Whatever you can do, or dream you can do, begin it. Boldness has genius, power and magic in it.’ (Goethe)

Michael Joshin Thiele will share more about the world of the onebeeing in his workshop The Alchemy of Bee-ing at the 2016 Biodynamic Conference on Saturday, November 19. Michael lived and practiced at San Fransisco Zen Center for eight years and received lay ordination in 2001. He is leading an innovative and multidimensional approach within the biodynamic apiculture movement and teaches in the United States and abroad. He is Founder and President of Gaia Bees and is researching wild honeybees and new dimensions of apiculture in a sociocultural, agricultural, and spiritual context. In the last decade, Michael has been involved with the creation of honeybee sanctuaries and refuges as a means of protection and education. In 2013, he worked as a biodynamic consultant for the USDA in the Dominican Republic. His work is documented in various national and international magazines, books, and film documentaries (Queen of the Sun).