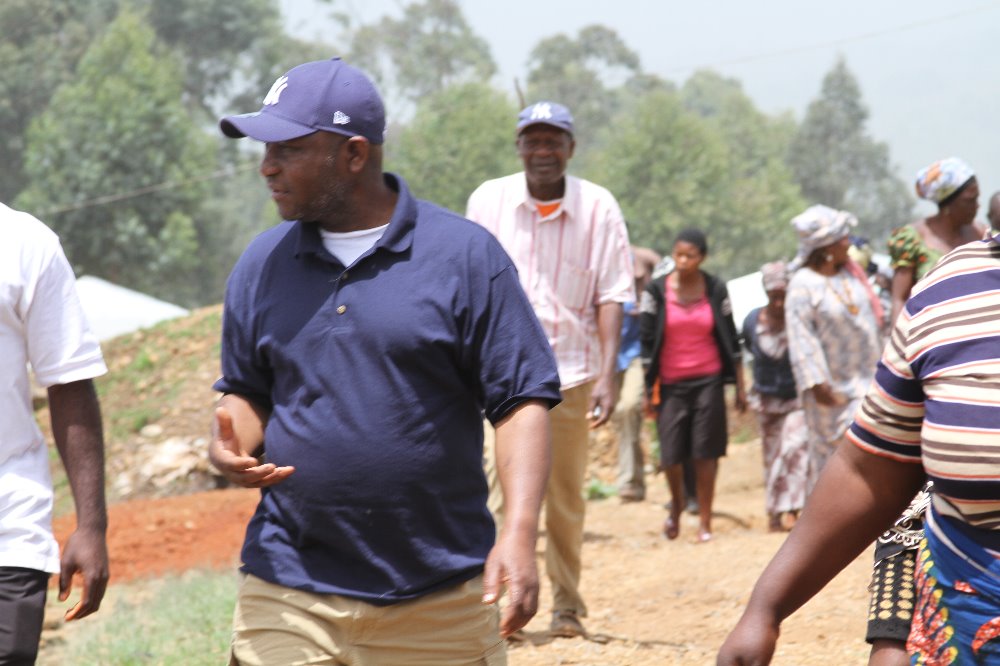 Arriving within a week of one another, Victor Kubia and I came to study biodynamics at the Pfeiffer Center in September of 2015. It isn’t enough to say that we come from very contrasting life situations: Victor is a spry 57-year-old from Bamenda, Cameroon, and I am a 22-year-old from Portland, Oregon. Despite the gap of common experiences, however, Victor and I became comrades the instant we met.

It was a blue day with powerful clarity when Victor appeared in the doorway of the tiny Pfeiffer Center cabin. This man was perfectly jolly despite having just driven 27 hours straight from Oklahoma, where his six children were beginning their school year. Sitting alone in the cabin, I was the very first person he had met in New York.

As he turned to leave, he confessed something else: that he is pursuing a genuine education in biodynamic agriculture for the sake of farmers oppressed by Western chemical/seed companies in Cameroon. With a face flooded by his characteristic smile, he told me a story about catching rats as a boy in Bamenda.

“When we saw the small rat enter the house, we would chase it up the wall where it had a hole to escape. Then we would grab it by the tail! Only the rat leaves the skin behind in your hand, and then you’ve got nothing.”

“When we saw the giant rat in the forest, we would eat it if we caught it. These animals dig holes underground. We would go to hunt, like a group of five boys; we would go into the forest and look for the hole. Then we have to look for the escape hole – sometimes there are two.”

“We would block the escape holes and light a fire to stuff the main hole, with smoke finally catching the rat in a net as it ran out for air!”

“We must learn how to catch biodynamics...not by the tail.”

Since then, Victor and I have shared a bathroom in the student dorms for nine months. He opened my eyes to the reality of farming in Cameroon, where 90% of farmers are women who live in great dependence on Western agricultural behemoths like Monsanto.

What is most distressing to Victor is the visible decline of the health in people, which mirrors the deterioration of their soils.

In April of 2015, Victor travelled to Cameroon armed with the DVD One Man, One Cow, One Planet, which features Peter Proctor. This movie tells the personal stories of farmers in India successfully transitioning from chemical agriculture into closed-system biodynamic farms. Peter Proctor himself had sent Victor the copy of this DVD. The response from farmers in Cameroon was monumental and telling.

Victor screened the movie to agricultural cooperatives ranging from a few hundred members to the 3,454-member organization NOWEFOR. He was asked to begin working immediately, but did not feel knowledgeable enough to lead such a movement.

Six months later, Victor began studying biodynamics through a year-long training offered by the Pfeiffer Center. Throughout the year, I watched Victor work tirelessly washing dishes to support his family in Oklahoma, often relying upon the kindness of new friends.

Fast forwarding to June of 2016, Victor has finished his studies and is now finalizing plans to move his entire family back to Cameroon in order to begin building a small education center that will teach garden-scale biodynamics through intensive handwork.

To assist this impulse for sustainable agriculture, my partner (and fellow biodynamic apprentice), Becky Sullivan, and I intend to relocate to Cameroon as well.

Currently the three of us are seeking support. We have reached out to the Section for Agriculture in Dornach, Switzerland, by applying to their Ambassadors program. They have accepted our applications and are processing them.

In addition, we have set up a modest gofundme page that shares Victor’s story in greater detail and asks for only $9,000 to support our practical needs in establishing a center for biodynamic education and food production. The money we are requesting will go towards building a small animal shelter and greenhouse. This money will allow us to buy invaluable handwork tools and small-scale irrigation hoses and will help us establish a reliable water source for our project.

If it is at all possible to provide assistance, please visit our  gofundme page.

When I asked Victor how he would feel if we reached this financial goal, he responded with the following:

"I will just be too overwhelmed with joy if this happens. My thanks and appreciation will go out to anyone who is willing to help. I believe the law of sowing and reaping is a natural law that never fails. Things will begin to happen in your life too."

Andrew Toothacker is an apprentice in the North American Biodynamic Apprenticeship Program (NABDAP).