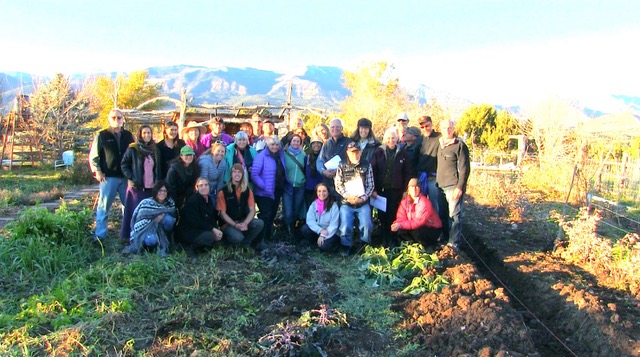 By Stone Hunter When I arrived at Sustainable Settings in Carbondale, Colorado, in March 2015 for the continuation of my North American Biodynamic Apprenticeship (NABDAP) training, I landed into a world of shifting perspectives and practices in respect to biodynamics. Just two months prior to my arrival, there was a five-day intensive seminar in the neighboring town of Paonia, titled “Spiritual Agriculture I,” with Enzo Nastati. My mentor, Brook Levan, attended the seminar after first hearing Enzo speak a year earlier in Paonia and then in Kentucky. Enzo then visited Sustainable Settings to consult with Brook regarding the farm as a whole organism and the Homeodynamic* approach to farm stewardship.

I began to hear stories about the seminar and other farm consultations with Enzo, and could feel how these brief encounters had shifted something in Brook and at Sustainable Settings. I began to read the transcripts from “Spiritual Agriculture I” and other texts written by Enzo, including Fertilization, The Regeneration of Seeds and New Plants, Meteorology, and Freedom and Love (available at www.moodie.biz). I was preparing to attend “Spiritual Agriculture II” in November 2015 and to meet Enzo in person. That growing season I was thoroughly entranced with the strong anthroposophic and biblical foundation from which Enzo wrote and spoke about new ways of working with preparations, the significance of the thirteen Holy Nights, the redemption of the Kingdoms and Man, and so much more.

All my musings were finally put to rest when I met Enzo Nastati, and his assistant and translator Silvia Giaretta, in person. In truth, I was nervous about meeting him, and, when I did, I sensed the strength and clarity of  his convictions. Before the “Spiritual Agriculture II” seminar in Paonia, Enzo consulted at Sustainable Settings and we visited the grain field where I was cultivating flour maize and wheat. He gave me indications on what traits in the corn and wheat were favorable to encourage the “new plants” to emerge. We looked for multiple shoots coming from single maize seeds, filled ears with well formed kernels from the earthly base of the ear to the cosmic tip, and wheat which lodged at a thin neck. I had planted sunflowers along with the maize and he perceived how these were “shepherding” the grain and giving their forces to the grain. We also spent time designing a new twelve-sided round barn, with a tree associated with the sun, like Linden or Ash at its center to facilitate a toroidal (doughnut-shaped) circulation between the earth and the cosmos. Every detail matters, I soon discovered, from the placement of the doorways to the directionality of where the new dairy, commercial kitchen, lecture and meeting space, and storefront were placed. Enzo then provided a homeodynamic preparation specifically developed to mediate and temper the “coarse astrality” that created the stench of the for poultry and pig yards. 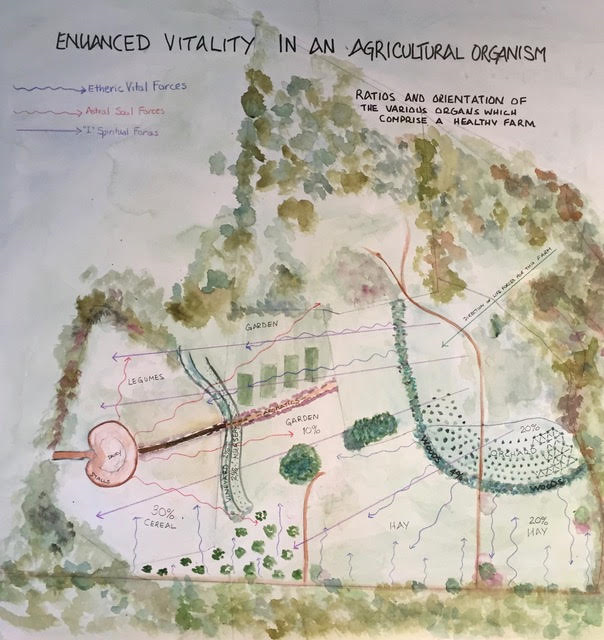 We began the “Spiritual Agriculture II” seminar a couple days later. Opening with the “America Verse” given by Rudolf Steiner, Enzo then presented us with a living image of the “dialogue” we must facilitate in as farmers between what is Cosmic (in potential, or free flowing forces) and what is Earthly (actualized and bound to matter). We moved on to investigate moral qualities, ways to “measure,” and helpful and harmful practices that encourage or obstruct the ascension of the Earthly, the incarnation of the Cosmic, and the mediation of the two. Again and again, we would return to schemas such as this threefold union, the alchemical “square” of the four elements, and lemniscates, to illustrate the circulation of  “Earthly Love and Cosmic Wisdom,” and how we can think clearly, feel purely, and act nobly for the regeneration of matter through enlivened circulation.

After my first seminar with Enzo, I was both nourished in soul and spirit, morally challenged to refine my own coarse qualities of character, and learn this new language of archetypal significance and patterns. As a young adult with a developing Individuality, I profoundly felt the power and presence of Enzo’s own choleric, strong personality, and strove to integrate all I had experienced into my own unique configuration. The resonance and love presented through the work shone out to me, and beckoned me to see beyond the personal and interpersonal to the spiritual reality and significance of what we were sharing. 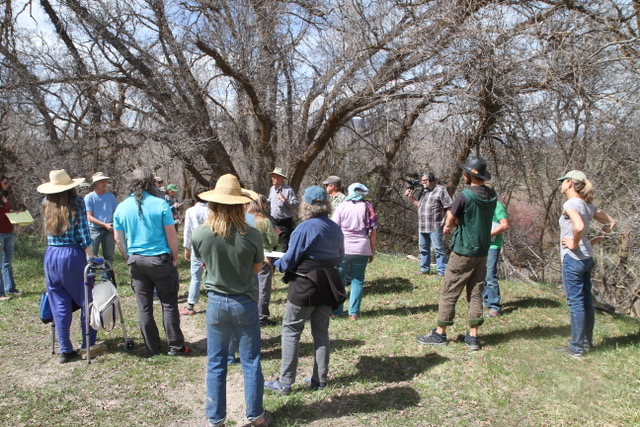 I later attended a Nastati seminar on “Depollution” in August 2015 and a third five-day seminar on “Spiritual Architecture” in April 2016. During the “Depollution” seminar, we focused on the spiritual science in the transmutation of substance, and applied what we were studying collectively to prepare an iso therapeutic remedy which was later given to remediate the “Gold King Mine” pollution of the Animus, San Juan, and Colorado Rivers. (Enzo works continually to remediate salinated soils, EMF and electrical pollution, harmful building forms and substances, and radioactivity, at his institute EUREKA Italy and in partnership with Viva la Vida Foundation in Paonia.)

During the “Spiritual Architecture” seminar, we studied the significance and details of creating therapeutic structures which can act as essential “organs” or “chakras” in our farm or community organisms. Again referring to the dialogue between the Earthly and Cosmic, and the alchemical elements, we investigated the essential nature of the materials, forms, and orientations we use in architecture. Drawing from ancient cathedrals and indigenous dwellings, and contrasting them with “modern” buildings, we were led to an understanding of how form and substance have the potential to facilitate and obliterate the incorporation of etheric, astral, and spiritual forces. These considerations activated within me the yearning to develop the spiritual and practical skills necessary to built structures which enhance the life forces present in the environment and enliven the soils, plants, animals and humans in and around them.

Much more was presented than I am able to convey here. However, much more information may be found through Viva la Vida Foundation. At Sustainable Settings, we continue to work with spiritual and applicable indications given by Enzo, and are continually enriched by their effects. Personally, I feel that my introduction to the work of Enzo Nastati and the Homeodynamic approach elevated my NABDAP training to a state of true initiation. Enzo encouraged us to take our intentions, devotion, and questions consciously into sleep so that we could act on higher levels to support and fulfill the work we accomplish during the day.

hen I read Dennis Klocek’s Sacred Agriculture and listened to him speak at the 2016 North American Biodynamic Conference in Santa Fe, I immediately grasped the significance of his practice of taking “living images” and meditations into our sleeping consciousness. Parallels between Enzo’s work and other leaders in the biodynamic movement are continually arising within me. At the end of Klocek’s keynote presentation in Santa Fe, he told an esoteric story imparting the sacrifices of the mineral, plant, and animal kingdoms for humanity and the cosmos. I was deeply touched by this story, and it reminded me of many occasions when Enzo articulated the “debts” we owe to our mineral, plant, and animal relatives, and our blessed burden to resurrect and heal all of our relations.

Through fully taking responsibility for the central role of humanity and our consciousness in evolution, the farm organism, and our personal destinies; one may instill the moral appreciation, compassion, forgiveness, comprehension, enthusiasm, and responsibility necessary to live as free Individuals who choose to bless and heal with the essence of Love.

* Homeodynamics emphasizes the centrality of the human being as an evolving co-creator with the quantum capacities to affect soils, plants, and animals through spiritual scientific approaches including homeopathy, eurythmy, sacred architecture and geometry, and more.

I do consider BD to generally be whole-brained, this is why it's been so sustainable.  It supports users exercising both right, left gut and head brains.

Marko Pogacnik has about a dozen books with a similar solid right-brain appraoch.  Probably his most accessible book:Nature Spirits & Elemental Beings: Working with the Intelligence in Naturehttps://www.amazon.com/dp/B078SF3JHL/ref=dp-kindle-redirect?_encoding=UTF8&btkr=1

The left brain-pieces areembodied in several approaches also.   Of them all, I favor Carey Reams approach.  I have tons of documents I can share.