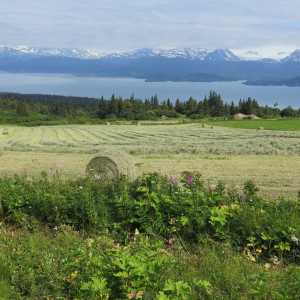 The (boring) Carbon Cycle Carbon is the most important element on Earth and the best way to begin explaining its significance is with the terribly important carbon cycle. The trouble is whenever I see the word ‘cycle’ my eyes start to glaze over. It doesn’t matter if it is the water, mineral, energy, nutrient, or some other cycle critical to our existence, for some reason my attention begins to wander the instant I see the word. I remember attending a conference years ago where a speaker displayed an image of the nitrogen cycle on a farm he was studying. It had something like sixty-four separate arrows flowing in every possible direction, including in circles. I took one look at the image and immediately put my pen down. No amount of notetaking was going to make sense of this cycle when I tried to explain it later.

Maybe it’s something we pick up as children. When my daughter did a homework assignment on the hydrological cycle for a science project both of us struggled to stay focused. It was good stuff – don’t get me wrong – and she enjoyed drawing clouds and rain and squiggly lines flowing upward from the ocean into the sky. When it came time to explain it all, however, the fun disappeared as fast as water on a hot sidewalk. Let’s be honest, ‘evapotranspiration’ is hard to say much less describe in simple terms. Making circles in the air with my finger was the best I could do.

The problem is there’s usually no story to go with these big ideas. Take this image of the carbon cycle produced by the Quivira Coalition for one of our publications: 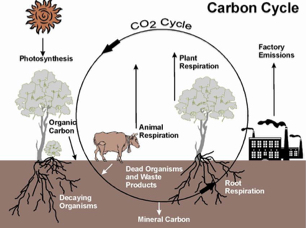 As a depiction of the never-ending cycle by which carbon dioxide (CO2) flows out of the atmosphere into the soil as carbon via photosynthesis and green plants and then back out again via decomposition and respiration, round and round, sustaining nearly all life on the planet, the image does a great job. I especially like the way it distinguishes nature from industry. The fossil-fuelled factory sits off to the side, outside the circle, pumping three hundred million year-old carbon, previously buried in the ground as coal, oil or natural gas, directly into the atmosphere as CO2. No cycle there – just a straight line up.

I like this image of the carbon cycle, but it’s boring. That’s because it doesn’t tell a story. What’s up with the cow, for instance? What is it doing there? Does it belong to someone? Did a visitor leave a gate open someplace allowing the animal to wander in? And what about that factory? What’s it making? Electricity? Cement? Artificial fertilizer? Is it Chinese? American? Brazilian? Does its owner hire undocumented workers? Is up to code? Has it been busted for improper disposal of byproducts?

I’m being facetious, sort of. Carbon is essential to life but it’s also rather abstract which is one reason why we’re having a hard time getting our minds around CO2 pollution, carbon credits, soil organic matter, carbon sinks, carbon farming, even global warming. Carbon needs a story. Or rather, lots of stories. It isn’t enough to wave our hands in the air and say “if we damage the carbon cycle all sorts of bad things will happen!” Instead, I look at this image and think “Will someone get that lost cow back into the pasture with its herd!” That’s the rub – how do we get important concepts across without the eyes-glazed-over effect? It ain’t easy. But it’s important to try because the issues involved are increasingly critical. I’ll see what I can do. ...

Read the rest of "The Story of Carbon" here, and hear more from Courtney White in his keynote presentation during Regenerating Earth and Community on Friday, November 18, at the 2016 Biodynamic Conference.

A former archaeologist and Sierra Club activist, Courtney White dropped out of the ‘conflict industry’ in 1997 to cofound the Quivira Coalition, a nonprofit dedicated to building bridges between ranchers, conservationists, and others around practices that improve economic and ecological resilience in western working landscapes. He is the author of Revolution on the Range (Island Press), Grass, Soil, Hope (Chelsea Green), The Age of Consequences (Counterpoint Press), and 2% Solutions for the Planet (Chelsea Green). Courtney's writing can be found on A West That Works. He lives in Santa Fe, New Mexico, with his family, two dogs, and four chickens.