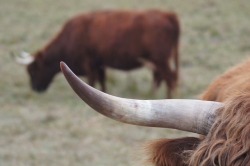 “Farms are the places where we negotiate our relationship with nature,” explained Tom Spaulding, Angelic Organics Learning Center’s co-founder and Executive Director at the Midwestern Ecology Symposium at the Janesville Muslim Dawa Circle. Tom accompanied other distinguished speakers at the symposium, including his wife and Learning Center co-founder, Dr. Neddy Astudillo. Tom addressed the topic of biodynamic farming at the symposium.

Biodynamic agriculture found its genesis in a series of agriculture lectures by the Austrian spiritual scientist Rudolf Steiner, who also founded Waldorf education. The lectures were addressing farmers lamenting that food had lost quality with the more mechanical and reductionist ways of farming — this was in the 1920’s! This sacred agriculture dubbed biodynamics was the precursor to organic farming.

Biodynamics is a combination of the terms biological, referring to the seen forces in nature (like a seed) and dynamic, referring to the unseen forces in nature (the forces that compel the seed upward to the light) that combine to animate life. There is a recognition of the whole of cosmos in the shaping of every plant, every animal, every human being. These are the forces that continually build us up again, regenerating our cells, opening our hearts, evolving our spirits.

In biodynamics, the farm is seen as an organism, with the whole being greater than a sum of its parts. Tom used the example of dissecting a frog. Through dissection, we can see the different organs and gain an understanding of how they work together to create the frog organism. However, looking at a dismembered frog body, one cannot appreciate the magnificence of listening to a frog’s song on a late spring evening or watching the beauty of the creature transform from a swimming tadpole to a mature, leaping frog.

A healthy farm organism is also composed of many parts— the microbes in the soil, the ruminants bowing their heads to the earth as they graze on the grasses, the compost that is created from their digestion, the wild spaces welcoming biodiversity, the flowers and the bees that are attracted to them. When composed all together, these elements create an unique symphony. Each farm possessing its own beingness and personality. The job of the biodynamic farmer is to learn from that being and nurture the personality and expression of the farm organism.

In recognition of our connection to the living land, biodynamics offers the simultaneous healing of the body of the land and the body of the human. Tom discussed the homeopathic preparations that are an integral role of biodynamic farming to restore balance to the land. The farmer distills a combination of the kingdoms of nature: plant, animal, and mineral aspects of the farm and creates a remedy for balance in the subtle, dynamic forces of the farm. He swirled his arm to illustrate the ritual of the mixing of the elements into the water creating a mesmerizing vortex before it is applied to the fields. He described “the voices as the farm come to speak” as the preparations are sprayed on the fields. The birds fly in and out of the spray and the insects emerge and enter the dance. He mused that perhaps part of the reason that Steiner called for the creation and use of the preparations was to give the farmer the time and space for the stillness to reflect. Applying the preparations, Tom declared, “feels like a prayer.”

Tom and Neddy attended the 2016 Biodynamic Conference in November in Sante Fe, New Mexico. There were nearly 800 in attendance at the conference. This year’s theme was “Tierra Viva: Farming the Living Earth” and included wisdom from indigenous elders as well as biodynamic students and farmers from across North America and beyond. Tom wished he could have brought the whole staff to the conference, but he at least brought home the breath of fresh inspiration to fuel our flames.

Tom ended by saying that Steiner taught that the next stage of human evolution is to think from the heart, a message that has been coming to me relentlessly for the last couple of months. I believe that Angelic Organics Farm inspires people to do just that — through experiences that touch the head, heart, and hands. As Farmer John Peterson, founder of Angelic Organics CSA, explains, “Everyone needs a farm in their heart.” If more people carry a farm in their heart, we can truly change the food system.

“The way we see the world shapes the way we treat it. If a mountain is a deity, not a pile of ore; if a river is one of the veins of the land, not potential irrigation water; if a forest is a sacred grove, not timber; if other species are biological kin, not resources; or if the planet is our mother, not an opportunity - then we will treat each other with greater respect. Thus is the challenge, to look at the world from a different perspective.” - David Suzuki